Wimborne Minster
A religious building of some type has existed in Wimborne since the beginning of the 8th century. The present church is a mixture of styles but many of the interior arches and much of the central tower dates from 12th-13th Century. Thee Minster has a number of Romanesque/Transition Period carvings and arches. These combine both features of Romanesque and Early English architecture and decoration as can be seen below. The church has a number of fine carvings above the arches which appear Romanesque in style.

The Male exhibitionist corbel
This figure was found by Rachael Harding on a trip to Wimborne Minster in January 2009. No one in the church seemed to know about which is unsurprising as the exhibitionist details can only be found with telephoto lens or binoculars. The figure is holding a broken object in the right hard while the left holds a what appears to be a piece of cloth to its mouth. The figure also has a pair of stubby legs and a modest penis and testicles. This and the acrobat corbel are set high in the rafters to the right of the main entrance to the church. Their position, flush with the roof would seem to indicate that the corbels were originally moved from elsewhere.
Another damaged male exhibitionist (along with a female figure) exists in Dorset at Studland. 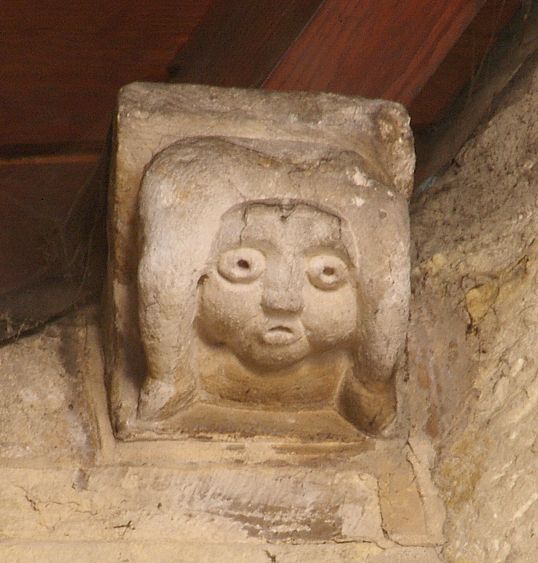 Acrobat corbel high in the rafters