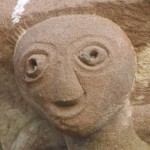 What are Sheela Na Gigs?
Sheela Na Gigs are quasi-erotic stone carvings of a female figure usually found on Norman or to be more precise Romanesque churches. They consist of an old woman squatting and pulling apart her vulva, a fairly strange thing to find on a church. The carvings are old and often do not seem to be part of the church but have been taken from a previous older, usually romanesque, building. See the weathering on the Church Stretton Sheela as compared to the surrounding masonry. It is very likely that the sheela comes from an earlier 12th century chapel that stood on the site.

The Sheela Na Gig Project
The Sheela Na Gig Project is an attempt to collate information about Sheela Na Gigs in the UK. Whereas there seems to be plenty of data on Irish figures the UK and continental figures are often overlooked. This website aims to address the balance by listing all known figures in the UK complete with photographs and include information on figures from the continent. This is by necessity a work in progress so please check back to see if any “new” sheelas have been added. You will find many figures here that appear in books on the subject and some that do not. The site also includes figures which are reported as being Sheela Na Gigs but in fact are other types of Romanesque motifs. The information on this site has mostly come from first hand visits to the figures except where indicated. We have been gathering information on figures since 1999 using visits, printed sources, information supplied by visitors to the site and users of the sheela na gig mailing list. All articles and photographs are copyright John Harding unless otherwise stated.