These male and female carvings date from the 13th century and reside in the tower Museum attached to the church of St. Marien in Brookmerland, East Frisia, Germany.

Both figures are spread legged with their hands on their knees and are unequivocally exhibitionist. One curious features is that they have their heads forward on the chest. This makes them look somewhat like Blemya figures. The female has small breasts located either side of its chin. Unfortunately the male figure was only on display as a drawing and has a modest set of genitals on display.

The present day church is a brick building which replaced the original church in 1829. The museum houses a collection of friezes and other sculpture from the remains of the 1829 demolition. As you can see from the lithographs below there are definite echoes of Romanesque style in the original church which makes the presence of the two exhibitionist figures more understandable.

All photographs used with the permission of the original photographer.

This figure resides on St. Michaels church Laxton, Nottinghamshire. It combines the exhibitionist motif with the devoured sinner.

Sr Michaels in Laxton dates back to the 12th century with the nave and the pillars being given a date of around 1190. The figure above however does not date to this period. It consists of a hellish monster devouring a man with only the legs buttocks and genitals being visible. This motif can be seen elsewhere in the UK two examples on this site can be found at Devizes with only the legs and shooed feet visible and a female example at Alstonefield in Derbyshire. Both of these examples date from the 12th century unlike this figure.

Thanks go to Mr George Wingfield for informing the project of this figure. Brent Knoll church in Somerset dates back to 11th century but the tower on which this carving resides dates from the 14th. The figure is most likely contemporary with this phase of building. The figure depicts a monster in an “acrobatic” pose with its feet held to its ears. A smaller monster head pokes out from its mouth and appears to be indulging in self fellatio with the shaft of the penis clearly entering its mouth. Definitely an unusual figure which predates the Alien movies by centuries but has a distinct similarity to the Xenopmorph’s projecting jaws.

The church also has a series of satirical bench end carvings depicting clergy as foxes.

New page on this interesting church with multiple exhibitionist figures. 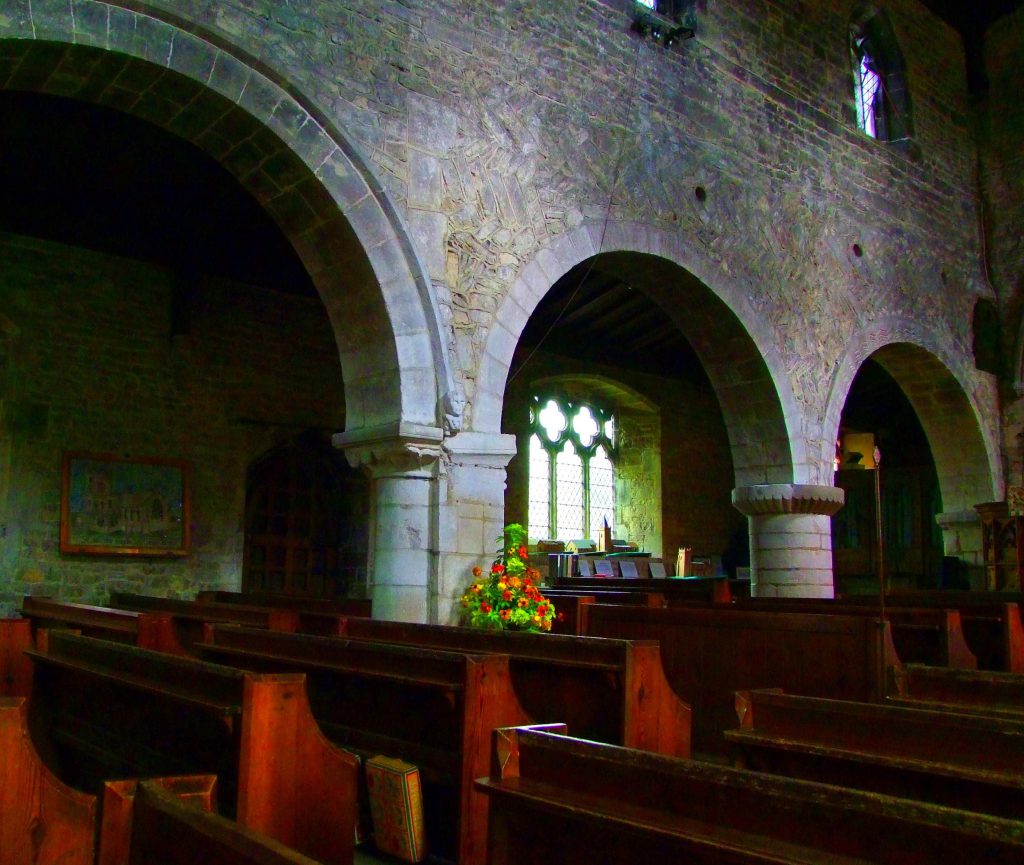 There is a new page on the intriguing Litchborough Male figure

Thanks go to Paul Ellerton for sending me these pictures

Unfortunately there is not a lot of detail about this church. The information booklet in the church says that it was started in the 12th century and the carvings could originate from that period. The figure consists of two heads, the left has its eyes being pulled by a smaller figure while right is accompanied by an apparently ithyphallic male figure. This figure appears to have a hand holding a massively exaggerated penis. The fingers of the hand appear to be broken seemingly by weathering.

Nunburnholme is a small village near Pocklington in the East Riding of Yorkshire.
The church of St James was founded by the family of Roger de Morely. The church holds a Norman arch with at least one other Norman fragment of a peg toothed face embedded in an outside wall. The face also includes a fragment of zig zag carving which would seem to suggest a Norman origin.

Thanks go to C.B. Newham of www.digiatlas.org for the use of the pictures and  information about the carving. Pictures copright  C.B. Newham

In their 1997 publication ‘An Illustrated Map of the Sheela na Gigs of Britain and Ireland‘ Jack Roberts and Joanne McMahon mention a Sheela in the crypt of Glasgow Cathedral:

‘A figure preserved in the crypt of Glasgow Cathedral was noted in 1894’.

Glasgow Cathedral has a history going back over 1600 years, when the site was first blessed for burials by St Ninian around 397 AD. Later in the 6th century, Kentigern popularly known as Mungo was selected as bishop by the King, and the people. St Mungo was born on the shore of Fife near Culross. He trained for the priesthood at Culross by St Serf. Later St Mungo founded a monastic community, in Glasgow, and built a cathedral. St Mungo died in 603AD. St Mungo’s Cathedral was destroyed or severely damaged by fire, and the older building was rebuilt, and dedicated in 1136. The Lower Church, which houses the figure, was created during the 12th century by Bishop William de Bondington (1233 – 1258). Further developments to this part of the Cathedral occurred during the 13th and 15th century, when the Blacader aisle of the Lower Church was added by Archbishop Blacadere (1483 – 1508).

The Glasgow figure is very odd indeed, and difficult to say what it originally represents. The large triangular shaped head with a central groove sits on Herculean shoulders. Two powerful arms come to rest on the lower abdominal area, and the broad ill-defined legs are held in an open manner. The figure has a central ridge on the torso, running up from the pelvic area to the chest and two lower ridges either side.

Speculatively, the two lower ridges could represent, the vulva, while the large central ridge, a penis. To conclude could this figure represent a Sheela na Gig, a male phallic figure, a penis sucking hermaphrodite, or even a very worn minstrel figure playing some type of pipes?