Updated 16-04-2006. These figures are mentioned in Cave’s Roof Bosses of the Churches of England. Rather surprisingly they can be found in the cafe and near the Gift shop in Wells cathedral. The figure to the right can be found in the foyer between the gift shop and cafe. Look up as you enter the foyer and you should see the figure in front of you on the ceiling. The second figure can be found inside the cafe about half way down. This figure is not so distinct as the first and is badly weathered.

The Foyer figure. I recently revisited this figure and came away with better photographs. As you can seen from the above picture the figure seems to be fully clothed without any overt display of genitalia. There is a small lump in the groin area which may indicate that the figure is meant to male. Either way this figure is definitely not sheela na gig or a male exhibitionist. 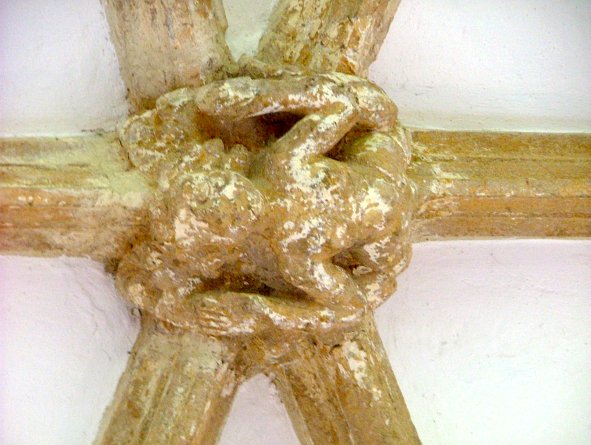 The second alleged sheela na gig in the cloisters (now a cafe). As you can see from the photos above and below this figure appears to be a splay legged possible angel rather than an exhibitionist. You can make out two wings either side of the head and the groin is most definitely covered by a loin cloth. 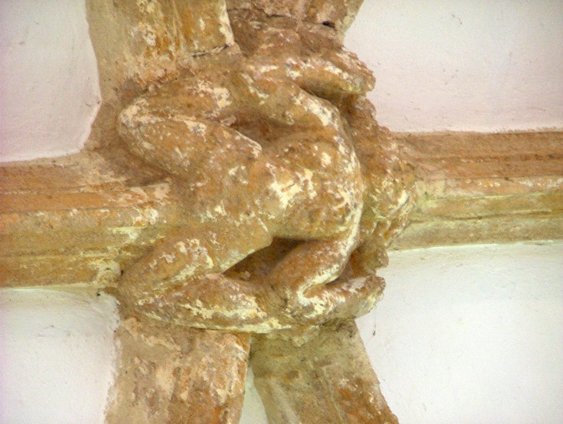 Cave mentions the figures in passing “as two sheela na gigs of an unusual type”. He does not give an exact position other than the cloister area. These two figures seem to fit his description. When Keith and myself the first visited the figures we both came away thinking that foyer figure was an exhibitionist, however on closer inspection this does not seem to be the case. We were more doubtful about the second figure and as it turns out with good cause. Neither of the figures is Romanesque and the carving appears later in style which further counts against them.
As can be seen with the Bristol figure and to a lesser extent the figure at South Tawton, Cave’s definition of a sheela na gig is idiosyncratic to say the least. With the better photographs above I think it is safe to say that both of the Wells figures are definitely not sheela na gigs or exhibitionists of any type, if of course these are the figures that Cave was referring to. If any knows of any better candidates for Cave’s figures then please let us know.