The church of St Giles at Stanton St. Quintin is located in the county of Wiltshire it is a small unassuming village very near the M4 motorway. I learned about this Sheela from internet mailing list and found out that it had been published in The Haunted Landscape a book on Wiltshire folklore. When visiting the site it’s easy to see why this sheela has not been reported before. Situated high on the church tower it is nearly indistinguishable from the surrounding masonry. We were only able to find the carving with the help of the ex-vicar of the church John Morgan who very kindly showed us round.

The figure itself is quite unusual, (if anyone can tell what a usual sheela is I would be glad to hear from them). Firstly as it is situated high on the church tower almost out of sight and does not seem to be associated with doors or windows. It is interesting to note that the Oxford sheela occupied a similar position though. The figure is quite small with a large squat oval head. It’s hard to tell from the photograph but the top of head may have been cut off. There also appear to be two large trumpet like ears. It also appears to be holding two grooved sticks. It’s hard to distinguish what these “sticks” may be. The sheela is also unusual in that it seems to have four holes drilled into it. Two large ones around the genital and stomach area and two smaller holes drilled into the main body. This is similar to the Seir Kieran figure now in the National Museum of Ireland in Dublin.

The figure is mentioned in the church guide but its height and position have probably kept it out of the gaze of most researchers.

Male or Female?
Once again we have to ask the question is this a sheela na gig? It lacks the overt unequivocal nature of the Kilpeck or Oaksey sheelas but what do those holes mean? Given that the holes are round were they used as socket for a phallus? The positioning of the holes would suggest that one position is meant for a flacid penis (pointing down) while the other is for an erect penis (pointing straight out). If this is the case then we have a male rather than female figure. The “breasts” however would seem to indicate that the figure is meant to be female. The lower hole could just be an exaggerated anus which can be seen on other figures like the one at Twywell.
The “ears” also appear to be fairly deep holes. Were these used to hold horns or antlers? The Seir Kieran sheela has similar holes on it’s head which some have argued have been used as sockets for this purpose. The smaller holes on the abdomen are more difficult to suggest a meaning for. All in all an enigmatic and puzzling figure.

Thanks to Richard Pederick for the use of the  b&w picture of the sheela below. 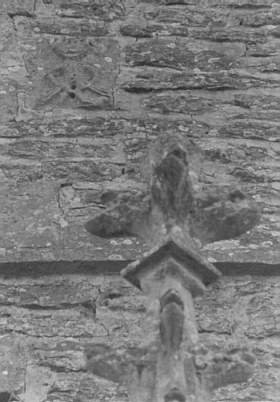 Photo of the figure by Richard Pederick

The church also has a number of carvings dotted around the structure most striking of these is the pillar heads on the back door to the church. Both pillars are topped by identical pillar swallowing heads with ornately carved headdresses.