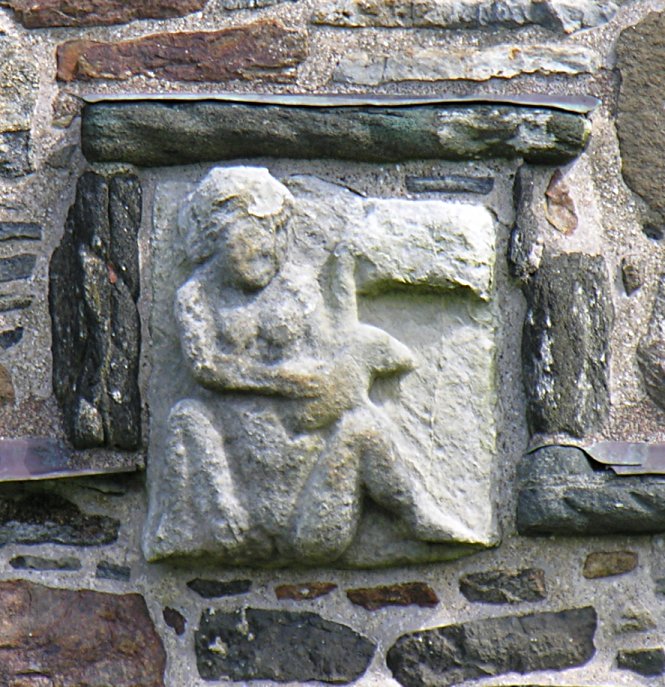 This figure is located on Rodel Church at the southern tip of the Isle of Harris in the Western Isles of Scotland. The current church is thought to originate from the early 1500’s but it is believed that it was built on the site of an older church of unknown date. The church is associated with the Augustinian nunnery at Iona  which also houses an alleged sheela na gig.
The Rodel figure is carved on a roughly square block on the east side of the tower, surrounded by a weathered string course.It is in a seated position with both legs bent and wide apart. The left leg is slightly more extended than the right. The vulva is represented by a small but definite cleft between the legs. The right hand holds a now worn object which has been described as a baby but looks more like an animal such as a dog or lamb. Intriguingly the left hand points to, or is holding a raised rectangular section stone which has a worn and rough surface. The face of the figure is turned towards this object. This rectangle is deliberately carved but it’s function is not immediately apparent. It would appear that the face was originally fairly detailed and the head is covered in what appears to be styled hair. Even though the figure is worn the vulva is still apparent and the splay legged nature of carving would definitely seem to put this figure in the exhibitionist category. On the south side of the tower lies an almost modern jacketed male exhibitionist figure known as “The Lewd Man”. This figure appears to be holding his penis in both hands.
Mairi Kidd writes about the figure on the Flickr Sheela na gig group

“According to Lesley Riddoch’s Hebrides bike-tour programme, Countess Dunmore had her ghillie shoot off this poor wee mannie’s wee mannie. Luckily he missed his clachan! Tradition has it that he is known as Seumas a’ Bhuid, which would be James of the willy in English. Rhymes with ghillie; maybe there’s a limerick in there. 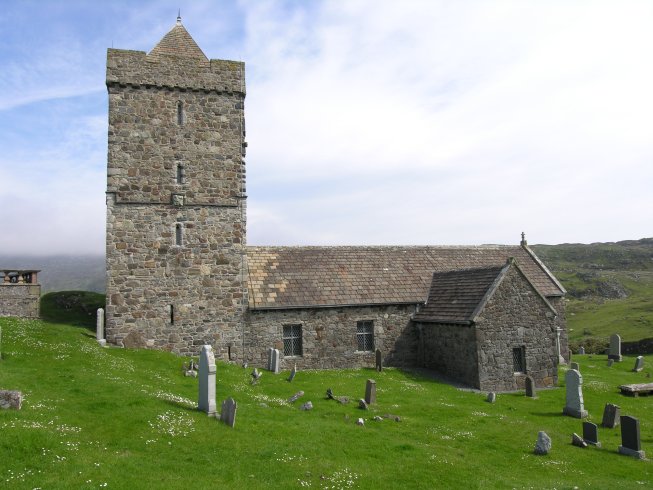