This near exhibitionist figure is to found in the Church of St Peter and St Paul Rock a few mile north-west of Worcester. The figure’s legs are splayed and held apart by the arms in a very sheela like pose. Saying that there is little to indicate the sex of the figure, though from what appears to be a headdress the overall impression is that of a female figure. In addition to this there is a pillar or possible phallus between it’s legs this could possibly be part of the snake or even a “stool”.  The figure is intertwined with a serpent figure with what looks to be a bird’s head (this may just be a medieval style of representing snake heads) and could be an example of a femme aux serpents figure. See Images of Lust for examples. While the figure lacks the overt exhibitionist nature of the sheela-na-gig there are undeniable sexual elements to it. Malcom Thurlby the author of the ‘The Herefordshire School of Romanesque Sculpture’ describes the  figure as exhibitionist 1 and also mentions  an abstract exhibitionist figure on the corbel table above the main door (see below). Bizarrely he compares this figure to the Sheela-na-gig at Kilpeck. The figure appears to be an animal head with two paws (arms?) either side and a grooved tongue protruding between them. Faint eyes are evident at the top of the figure.

Interestingly both he and Professor Zarnecki 2 ascribe the carving on the chancel arch, which includes the exhibitionist figure, to the Aston Master of the Herefordshire School who was also responsible in part for the carving at Kilpeck.

The Village of Rock

The village of Rock or Ake does not appear in the Domesday book but may be identified with the two berewicks Kiddiminster called Ribbesford. In the past Rock was once more important than it is today. In 1328 Henry de Ribbesford had a grant of a weekly market and a yearly fair on the feast of St Margaret. A now destroyed manuscript at Stanford Court records that “here was anciently a large town fit for receit, it may seem to have been a mercat”. The commercial importance of Rock is further borne out by the quality of the carving in the church which is said to rank with the best work in the county. 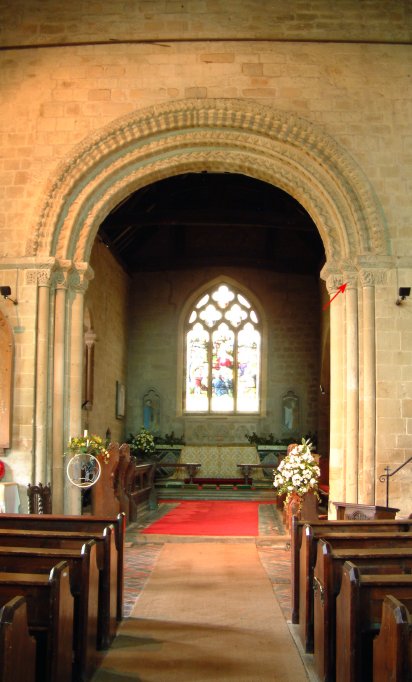 The position of figure on chancel arch (red arrow) 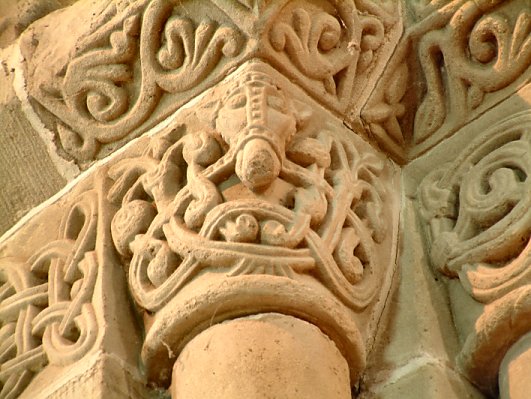 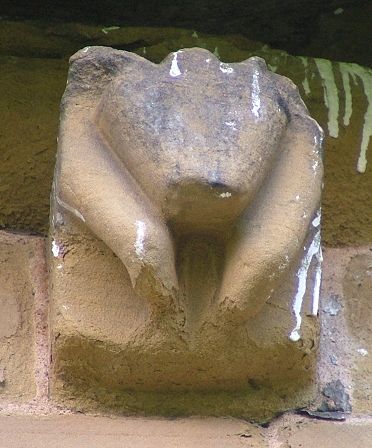