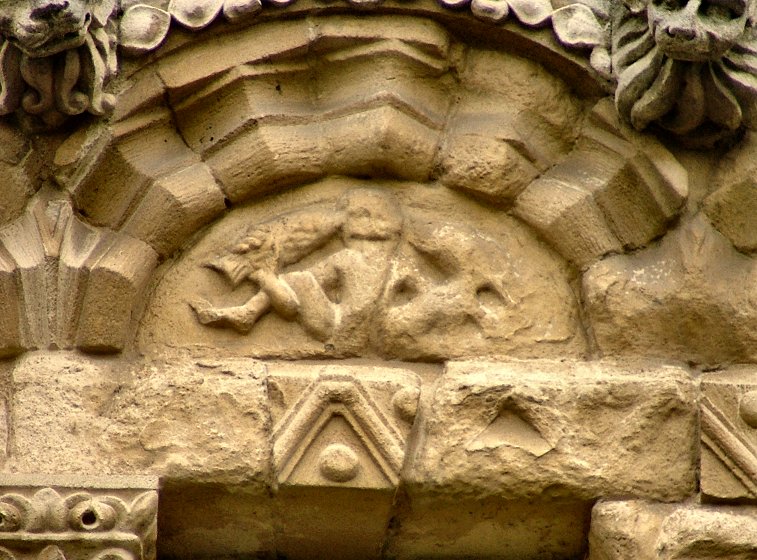 The Rochester figure is quite difficult to find if you don’t know exactly where to look (see below). It can be found high on the western facade of Rochester Cathedral. To the left of the main door look up until you can see two small thin windows one above the other. Look down until you come to three arches. The figure lies in the middle arch.

The genital area has been probably been chipped away, this damage is unlikely to be due to erosion because of the positioning of area at the bottom of the carving. The figure is cracked as well lending further weight to the theory.. During the civil war the two main figures on the ornately carved chapter door inside were decapitated by Cromwell’s soldiers. So if the figure was originally exhibitionist it would undoubtedly have been be a target for puritan attention as well. Unusually the figure holds two fishes, this feature may well have parallels in the carvings of double tailed mermaids found elsewhere. which hold their tails in their hands. While we can not be sure that the Rochester figure was originally exhibitionist it seems likely due to the positioning of the damage. It is also worth noting that the figures either side of this one are also damaged and appear to be of birds. The lunette on the left holds what appears to be two birds eating what may be a fish while the other holds a single bird attacking or eating a snake like object.

In addition to the carvings outside the church there are also many “green men” on the roof bosses inside the church. I was informed that there were up to 23 of them in total.

There is a older black and white picture of the figure on Anthony Weir’s website here. It’s interesting to note that the damage underneath the figure appears to be fairly recent when you compare the pictures above to the one on Anthony’s website.

The most striking and puzzling aspect of this carving are the two fish in the figure’s hands. One fish is scaly and one is smooth, the right hand fish may be smooth due to weathering however this scaly fish/smooth fish motif can be found elsewhere. One of the corbels at Kilpeck represents two fish, one scaly one smooth both pointing in the same direction. Interestingly the fishes are not thought to represent Pisces as this was more usually represented as two fish swimming in opposite directions sometimes joined at the mouth by a line. The church at Cunault-sur-Loire in France has a carving of a mermaid or Siren holding two similar fishes one scaly one smooth, the scaly one being presented to a man in a boat (see left). The author of Animal Symbolism in Ecclesiastical Architecture (1896) Edward Payson Evans interprets the fish as “the soul being held in the grip of a libidinous passion”. This description would seem to be further evidence that the Rochester figure was once exhibitionist especially with the figures rudely protruding tongue further signifying sinfulness. However we must be careful not interpret the figure to favour our own interests. There are two other carvings on a capital in the crypt at nearby Canterbury Cathedral which also hold fish and are thought to date from the roughly the same period (around 1120 for the Canterbury figures while the West door of Rochester Cathedral dates from around 1150). One side of the capital has a pair of “jugglers”, one man holds the other above his head while the man being held has his legs in a splayed position and holds a fish and a bowl. On the other side of the capital there is a monstrous chimera of figure which has the winged body of lion and two heads one of which is human while the other atop a human torso is horned and tusked. The horned figure also holds a fish and bowl like the juggler figures. Stylistically there are similarities which seem to suggest they are from the same school of sculpture as the Rochester figure. The bearded head of the splayed juggler has a similar oblong appearance to the Rochester figure, both figures have over large hands and the feet are treated in a similar way.  If the Rochester figure is from the same school of sculpture as Canterbury then this may be a pointer away from the figure being overtly exhibitionist. Despite there being a number of splay legged figures in the crypt none of them are explicitly exhibitionist. Even if the figure was not originally explicitly exhibitionist then the overall symbolism does seem to suggest a sexual meaning anyway.

So is this a Sheela Na Gig?

This page used to be titled The Rochester Sheela Na Gig in fact it is listed as such in Images of Lust and a number of other books. The Romanesque context is correct for a shela but it’s similarities to the crypt figures at Canterbury may mean that it was non exhibitionist. The relevant portion of the figure which would settle the argument is now missing so ultimately we are unable to decide either way. However it is interesting that only that portion of the figure is damaged rather than worn. 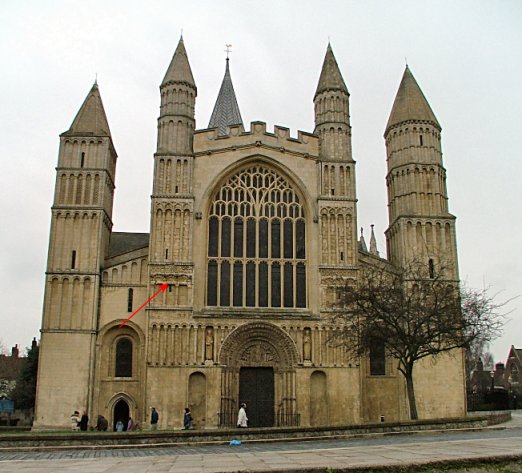 The position of the figure