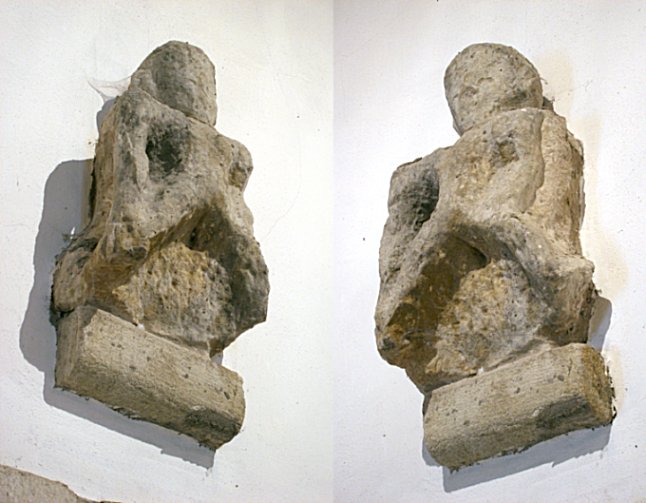 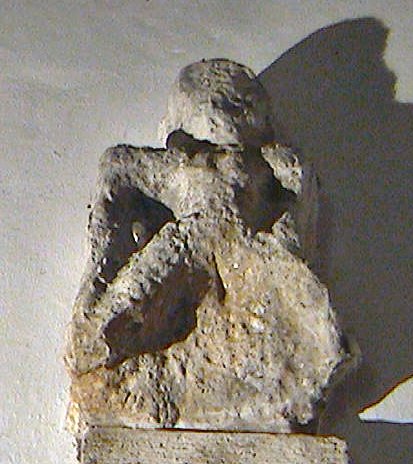 The present church of St Seiriol at Penmon on the Isle of Anglesy (Ynys Môn) in North Wales, was built between 1120 to 1123 and was once a major monastic site. St Seiriol lived in his cell just behind the church in the 6th century. The foundations of his cell, and the well are other interesting features of the area. The church also includes a wealth of carvings including a rather fine tympanum above the south door, the 11th century font, Celtic Crosses, arcading, a bearded man carrying an axe which is thought to represent Gofannon the Pagan god of blacksmiths, and the Sheela. The Sheela was thought to have originated on the west outside wall of the south transept, but is now fixed to the wall inside the south transept of the church.
The Penmon figure is badly weathered and the head has little of the facial features left although her ears can be made out. Both arms are held at the side of the body, the slit of the vulva is deeply carved between the legs which are held straight. Andersen suggests its similarity to the Oxford Sheela.

According to Roberts and McMahon a second figure situated in the dark interior of the church may also be a Sheela na Gig but very little is known about it. This is situated on a capital at the top of the south pillar of the rather fine Norman arch at the back of the church. This is rather crude and somewhat comical, which Anthony Weir describes as splay-legged, sexless and probably an acrobat symbolising unnatural acts. Archaeologia Cambrensis describes the western arch as follows

”..the capitals very rudely sculptured, and representing (if anything can now be defined of them), sprawling monsters or fishes..’

Addendum: A few hours after putting up this page some further information came in from the sheela na gig mailing list. Gay Cannon attended a lecture by Maureen Concannon. While speaking to someone in the audience who had visited Penmon he found out that coins had been left on the ledge below the figure. This was not immediately obvious though as the person had used a ladder to get a closer look. One more indication of the continuing respect that these figures are paid.

I finally managed to get to Penmon to get some photographs of the figures. My first impression was of surprise at the size of the figure. It was much larger than I expected having only seen it in photographs. 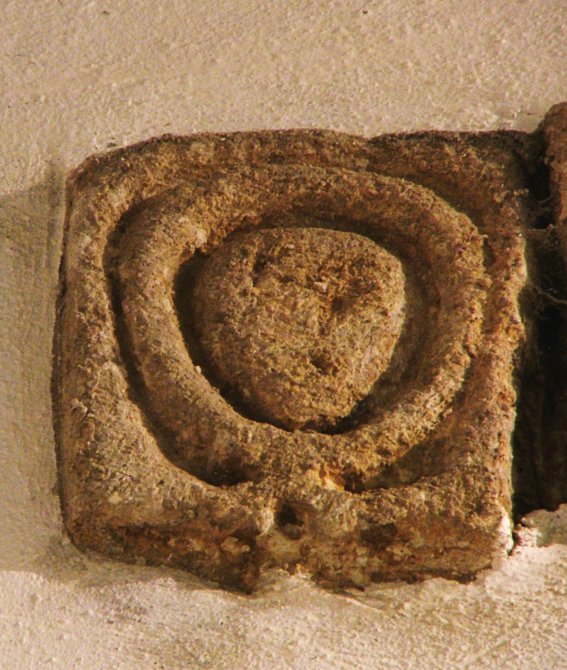 This figure has been suggested as a second, somewhat abstract, sheela na gig in a similar style to the Haddon Hall sheela. The piece is set high in the wall of the chancel above the larger tower arch. It is accompanied by a smaller enclosed head which appears to be part of a voussoir. This carving may also be part of a now missing arch. As you can see from the photograph the carving is very worn but does have a gap at the bottom of the figure. We could interpret the outer ridges of the carving as representing legs while the inner circle represents arms. This is however something of a reach. It’s equally as likely that the carving is merely an enclosed head like its neighbour. Unfortunately like the rest of the figurative carving in the church the quality is not terribly good with confusing details. All in all its hard to say exactly what the carving is supposed to represent. 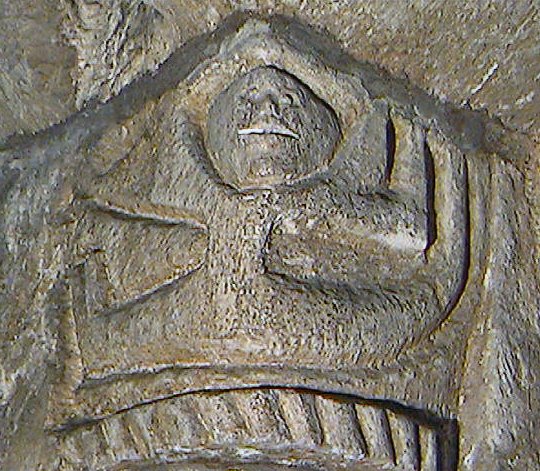 At first glance this carving appears splay legged but on closer inspection turns out to be a lot more complex and ambiguous. The right “leg” of the figure terminates in what appears to be a head with and open mouth and the other “leg” trails off into a tail. The left “arm” of the figure is bent at 90 degrees while the right appears more winglike. The arms and body may be compeletely separate to the head making bottom half of the carving a inverted dragon/snake like figure surmounted by a corner mask. The snake motif also appears on the opposite capitals (below). 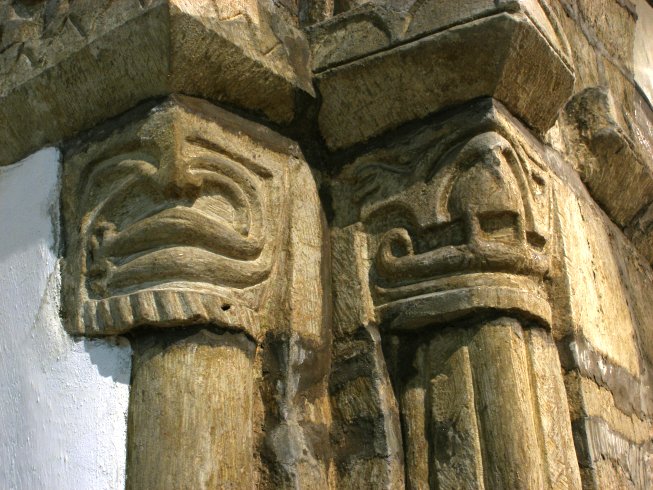 These two capitals like opposite the “splay legged” capital on the other side of the arch.
Whereas the former is confusing these two seem to be completely abstract. The left hand capital seems to be formed of two snake like bodies terminating in open “crab claws” or mouths while over the impression of the capital is of a thick lipped abstract face. The second capital is even more confusing with a headless half egg shaped torso holding down another snake like body. Two rudimentary hands are carved on the snakes body. There appears to be damage or an unfinished area where you would expect the head to be. The rest of the carving is a crude abstract pattern. All in all completely baffling imagery. 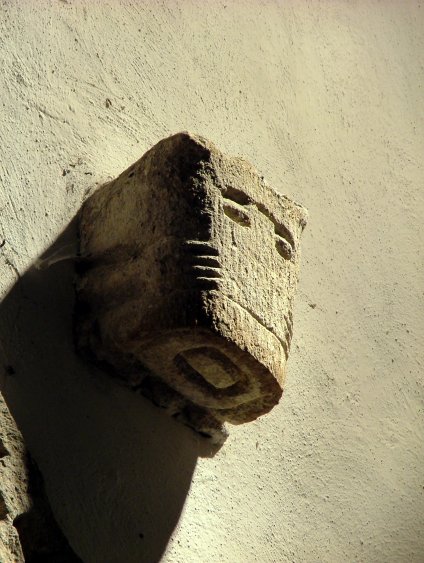 This beast head is also set into the wall above the tower arch. It represents a beast of some type holding its snout. This is a common Romanesque motif and is repeated at many sites such as St Peters at Northampton and Kilpeck. 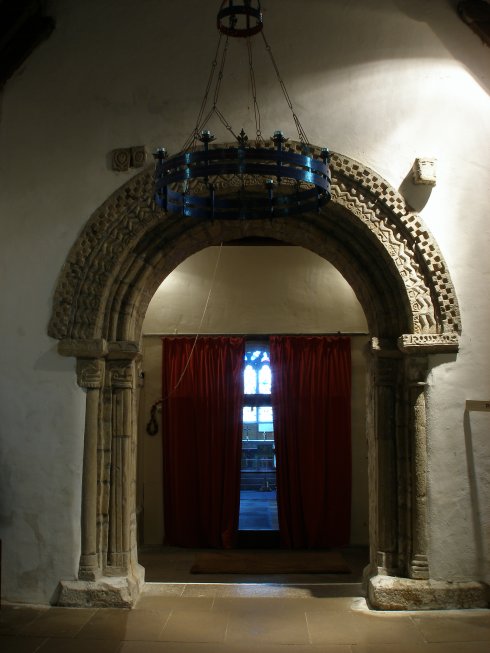