N.B. This site should not be confused with the large Norman church at Llanbadarn Fawr near Aberystwyth. This figure lies in the church of St Padarn to the North of Llandrindod Wells near the village of Llanbadarn Fynydd in Mid Wales. The church can be found on the side of the A438 near the village of Llanbadarn Fynydd on the way to Newtown. The church is reasonably modern in appearance (Victorian) with the main doorway holding most of the Romanesque carving. The alleged sheela figure is high on the right inside wall of the porch. This figure is reported as being a sheela na gig in the booklet outlining the history of the church and is also cited as such in Romanesque Architecture And Sculpture in Wales by Malcolm Thurlby 1. Little explanation is given for this definition as the bottom half of the carving is missing (or never existed). While the carving is not exhibitionist it does bear some stylistic similarities to the nearby Llandrindod Wells Sheela Na Gig. The breasts are treated in a similar way being flattened cones and the figure has ribs inscribed on the chest in the same way as the Llandrindod figure.The breasts differ slightly from the Llandrindod figure as they seem to be somewhat concave. The face differs from the Llandrindod figure being round and having a much more jolly smile than the enigmatic and rather peaceful expression on the Llandrindod figure. The arms of the figure are held tightly into the body but the figure is truncated at the elbows so we cannot tell if the arms originally crossed the body like the Llandrindod figure. If the figure is truncated and was originally a sheela na gig then it would quite possibly be the biggest figure ever found. The existing sculpture is quite large and if we extrapolate the rest of the figure then it would between 3 and 4 ft high. This would however tie in with the nearby Llandrindod figure which is also large for a sheela na gig. The porch also contains a double headed corbel, a carved tympanum and other carving on the doorway
Llanbadarn Fawr and the Hereford School
In addition to the alleged sheela carving there is a wealth of other carving in the porch of the church. Most notable is the doorway which has a number of figures carved on it including tympanum the symbolism of which is confusing to say the least. Its central motif is a cats head out which grows a tree  or plant. This flanked either side by a lion to the right and a wolf or dog to the left. To the immediate left of the cats head lies a sun or sun wheel symbol. Malcom Thurlby in his book The Herefordshire School of Sculpture cites the carving on this doorway as being a poor copy of Herefordshire School work in the not too distant East. Other churches in Wales such as St Woolos in Newport and Brecon Cathedral also contain examples of Herefordshire School inspired work. If this influence holds true then it would seem to suggest that the Llandrindod Figure and the figures at Kilpeck and Rock are all connected and the inspiration for the motif may have come from the same source.

The existence of the church in the 12th century is further confirmed in the writings of Gerald of Wales (Giraldus Cambrensis). His duties as Archdeacons of Brecon included the inspection of churches. However some of the clergy between the Wye and Severn rivers resented this interfernce. This attisude is born out by the low level warfare that existed at the time between the Lords of Marches to the East and the Welsh of the West. In Geralds own words :

“Every door in the town was barred against him, and there being no other place for him he took up his abode in the church which he chanced to find open, and ordered his horses to be picketted in the churchyard. After these outrageous proceedings, he straightway sent two clerks with a message to the prince of that land, Cadawallon ap Madog, his kinsman, telling him of his coming and how he was surrounded and besieged in the church. On hearing this the prince at once sent a sufficiency of victuals to the Archdeacon, with the message that he would come to him the next morning and take sharp vengeance on his wrongs, as if they were his own. But on receipt of this news the siege was raised at once, and six or seven clerks, who after the Welsh fashion shared the church between them came one after the other and bowed themselves humbly at the Archdeacon’s feet, seeking pardon and receiving it, but only after they had given due satisfaction for their disobedience, or rather their insolence.”

It is fascinating to think that Gerald may have used the same doorway to enter the church which exists to this day. 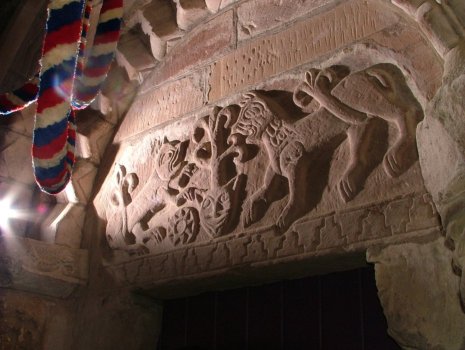 Typnanum at Llanbadarn Fawr. The figures either side of cat head/tree motif are a lion and lioness. (The trefoil tails looping under the bodies indicate that they are lions and the spoon like indentation on the neck of the right hand figure are meant to indicate a mane) 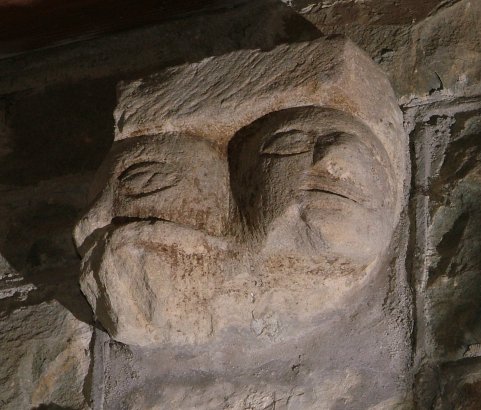 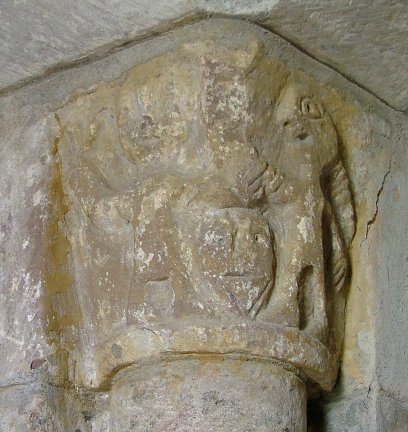 Capital possibly showing Adam and Eve. The odd hairstyle on the right hand figure is duplicated in another strange figure on a font at Hook Norton in England.