This carving is housed in the Edinburgh’s Royal Museum and is described as “a woman giving birth”. The figures originate from a 12thC church in Kirknewton which was demolished in 1780. The piece is a voussoir  which possibly formed part of an arch or doorway. The sign next to the figure notes the close links  between Scottish and English church architecture in the 12th and 13th centuries.

Having now seen this figure close up I’m more convinced that the carving has sexual overtones. There are a number points that would possibly put the “birth” theory into doubt. Firstly the piece originates from the 12th century where we know there is a tradition of exhibitionist carving on churches. Birthing scenes are virtually unknown the only other example being a corbel in Romsey which is thought to be a Victorian copy of a 12thC corbel. This corbel however is completely different in style being a head protruding from between the corbels legs.  Secondly the female figure is smiling, it’s more likely that birth would be portrayed as a painful experience in line with the bible.

Genesis 3:16 To the woman he said, “I will greatly increase your pains in childbearing; with pain you will give birth to children.”

Thirdly the female figure has her hand between the other figure’s legs on the groin. On the underside of the sculpture the legs of the figures are intertwined, this would be a little strange if it were a birthing scene. The left hand figure is almost certainly male. The striations on the head of the left figure indicating hair stretch up to the lip and chin representing a beard. The lack of breasts, which are present on the right figure, would also seem to indicate that the figure is meant to be a male.

Whereas no doubt men did play a part in births in medieval times depictions of birth would be far more likely to display a midwife rather than a male figure.  We also have to remember that a male figure in a birth scene is perfectly reasonable from a 21stC viewpoint, however what we are looking at was carved in the 12thC. Taking this into account along with the prevalence of sexual imagery in 12thC church carving a sexual interpretation would seem to make more sense than a birthing one. 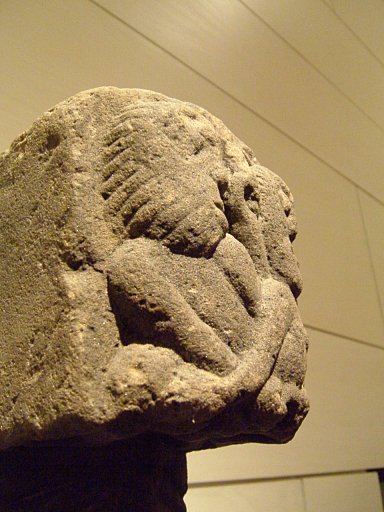