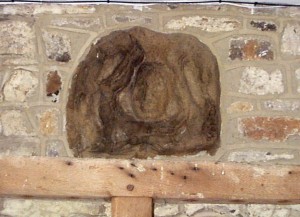 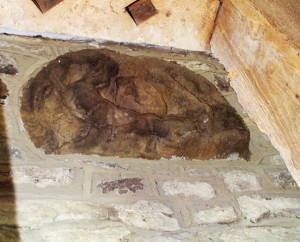 One of the few secular Sheela Na Gigs it can be found inside the old stables (now housing the tourist toilets) at Haddon Hall, Derbyshire . This sheela has been moved recently from its original position over the main door (see below) of the stables to the inside of the stables over what appears to be an old manger. This should prevent further weathering. The carving is fairly crude and large with the legs awkwardly held in the air. The hands are beneath the buttocks pulling either side. This is very reminiscent of the nearby Darley Dale Sheela. According to one of the guides at Haddon Hall the sheela was found in a field nearby and is much older than the hall itself but he also admitted to not knowing that much about the sheela so we have to take that with a pinch of salt. The “found in field” origin for the Sheela may be related to a roman altar to Mars which stands just inside the great hall. This apparently was dug up in one of the fields which sounds perfectly reasonable.

Haddon Hall dates from the 12th century but people have been living here since at least the 11th century. The hall is celebrated for it’s state of preservation and parts of the building have been standing since the 12th century. In 1087 when the Domesday book was written William Perevel the illegitimate son of William the Conqueror held the manor. The house became a fortified in around 1195 when a wall was built around it.  The sheela originally resided above the door to the stables which now house the toilets. This Sheela is curious because it is not on a religious building and is unique in Britain as it is the only unequivocal sheela in secular setting. Pevsner gives an Elizabethan date to the stables and Andersen concurs with this stating that the figure is a late example (1600’s). Given that Haddon Hall has been much altered over the years it seems more likely to me that this figure is a survival or perhaps a re-carving of a 12th century figure. Counting against this theory is its size which is quite large for a sheela and larger carving of figures tended to come from later medieval periods. Saying that we have an exhibitionist figure in a site with 12th century connections and most other examples originate from that period.

Apotropaic
Because this is one of the few secular sheelas we can say with some certainty that it is unlikely to be serving as an ecclesiastical warning against the sin of lust. It is however likely to be serving an apotropaic function protecting the building from evil or the devil. Why the stables were in particular need of protection will have to remain a mystery. It’s interesting to compare this figure with the Whittlesford figure which seems to be unequivocally depicting lust. These two examples clearly show why one particular theory does not fit all figures.