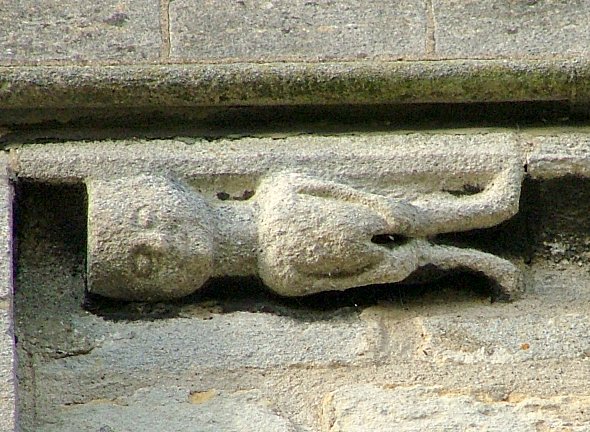 The Church of St Stephens in located in the village of Etton, just 5 miles north west of the centre of Peterborough. Christopher Seal reported this figure to John Harding as a Sheela na Gig. The figure is located on a corbel table high on the top of the southern face of the tower. The corbel table lies just below the spire. It’s interesting to note that the sheela is unlike any of the other carving on the table which consists mostly of heads, foliate symbols including the fleur de lys and geometric forms. It is by far the largest piece and consists of the whole body on it’s side (The Buncton figure also lies on it’s side.). It also has the curious feature of a flat head. This would seem to indicate that figure was meant to be upright possibly supporting something but is very tightly integrated with the rest of the corbel table and appears to be in situ, which makes the flat head something of a mystery. The present church was originally built in the 13th century but there are records of the church in the 12th Century Peterborough Chronicle. The parish itself dates back even further and is thought to have been a religious centre for thousands of years1. The style of the church is Early English but as the church book says it is a fine example of Early Early English2. If this figure is contemporary with the building of the church, which it appears to be, this would originate it in the transitional period from Romanesque to Early English and would make this a later example of the sheela na gig motif.
Mrs Anne Cowen the church warden was kind enough to show me around the church and dug out a record of the church furnishing done by NADFAS from 1992-1994. The book lists the figure as a sheela na gig ascribes it the usual “fertility figure” label.

The farm next to the church is the birthplace of Daniel Defoe’s father. 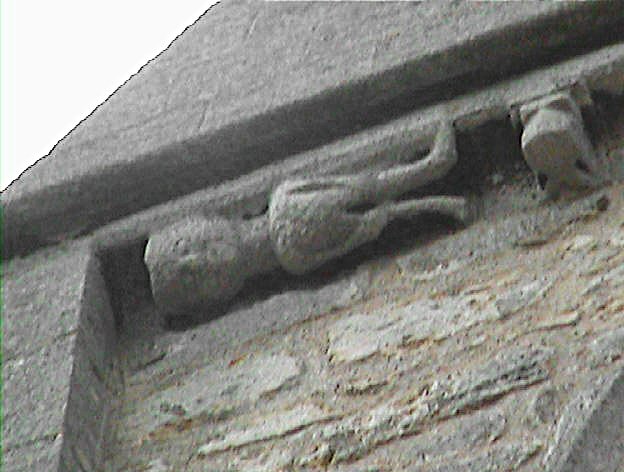 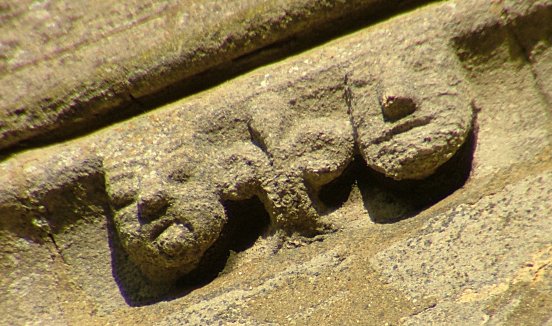 2. Lord Norwich “The Architecture of Southern England” after Christopher Crossley. “Pure unaltered 13th century churches are all too rare in England; to find one as complete as St Stephen’s is therefore no small cause for celebration. It looks as if it has not been touched since it was built. Here is Early English… and early Early English at that… ” (It is worth mentioning here that the church shows obvious signs of modification and this fact is mentioned in the church history. The “untouched” status Lord Norwich ascribes to the church may be a little wishful thinking JRH)