A sheela na gig at Ely Cathedral has been recorded for sometime. It gets a mention in Images of Lust after the work of professor George Zarnecki. However it turns out that there are two very similar female exhibitionist figures on the cathedral. This discovery came about from members of the Sheela na gig mailinglist visiting the cathedral to photograph the figure and comparing their results. The first members to visit the cathedral informed the list that sheela was extremely difficult to photograph as you needed to be in the Bishops private garden to get the best view. Other members of the list were puzzled at this as all you had to do was hop over a small wall and photograph the figure from a public green. Photographs of the figures were of low quality mainly due to the height of the figures on the cathedral’s clerestory. When they were compared they seemed to be of the same figure taking into account differing angles of view. However when the surrounding masonry and neighbouring corbels were compared it became obvious that the photographs were in fact of two different figures. Further research showed that the figures were in fact on opposite sides of the cathedral one being on the North clerestory while the other is on the South clerestory. The fact that the cathedral has two very similar female exhibitionist figures does not seem to be a well known fact. This is further borne out by the entries for the Ely corbels at the Courtauld institute’s CRSBI site where the North figure is not listed as being exhibitionist. As you can see from the picture on the left it most definitely is. Further discussions on the sheela na gig mailing list showed that some members had visited the north figure while others had visited the south figure. Both groups coming away having seen the Ely sheela na gig.

It’s thought French sculptors had a hand in the creation of Ely cathedral. This influence can be seen by comparing these figures to another exhibitionist in Vaux sur Aure France. The original picture can be found here on the Hortus Deliciarum site in France (French text. The website is dedicated to exhibitionist figures in France) 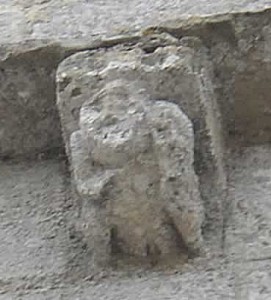 The South side exhibitionist figure (right) this picture from the CRSBI site clearly shows its exhibitionist nature. The south side figure is only viewable from the Bishop’s private residence which is obviously not open to the public. 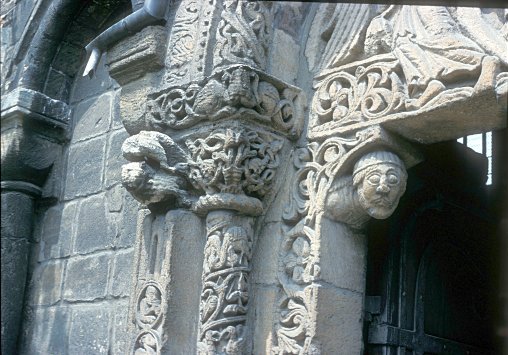 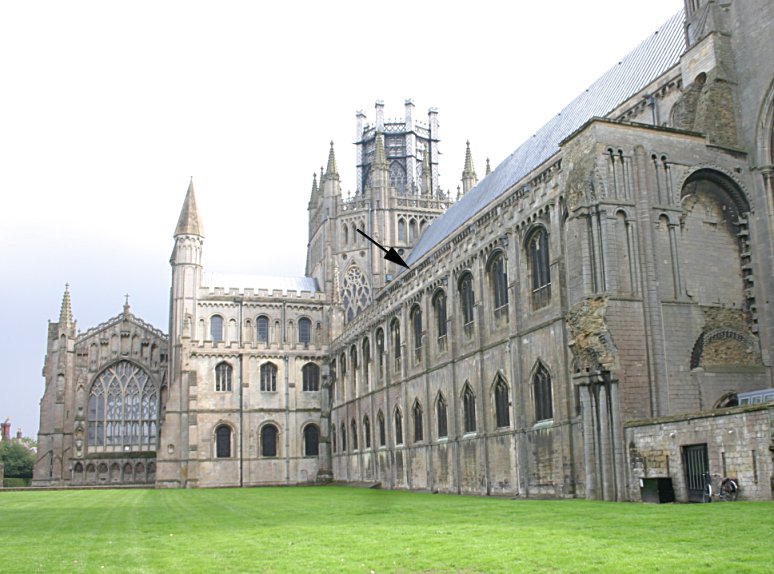 The black arrow indicates the approximate position of the sheela na gig on the North side of the cathedral
1. Clerestory. The upper part of the nave, transepts, and choir of a church, containing windows… or …An upper portion of a wall containing windows for supplying natural light to a building