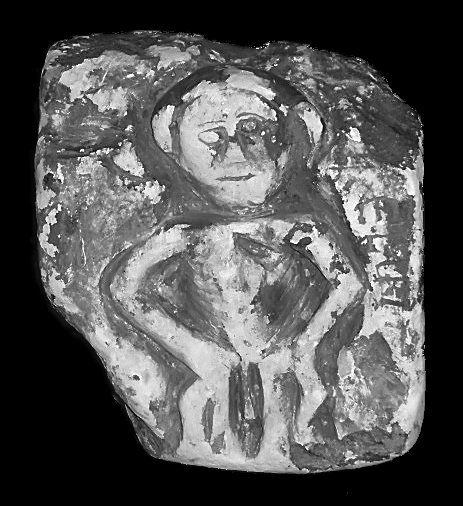 The Easthorpe Sheela currently resides in the Castle Museum in Colchester but originally came form the small parish church in nearby Easthorpe. It was donated to the museum by the vicar of the church early in the 20th century as he thought it too “obscene” to keep in the church. The figure was originally kept above the south doorway in an alcove but also served time as an ornament in the garden rockery of the vicarage. Once again we have classic position for a sheela above or near entrances to the church, however it is possible to make too much of this positioning as the alcove may just have been a convenient place to put the carving. Interestingly this sheela has the word ELUI carved down the right hand side. The significance of this name is now lost however both Barbara Freitag and Jorgen Andersen put forward theories on the possible meaning of the name. With Andersen citing a possible connection to St Eloi and Freitag giving several possible connections. For some more conjecture click here.

The figure stands with bent knees, both hands gesture towards the oversized vulva which reaches to below the feet and seems to include a clitoral hood. The figure has faint ribs inscribed on both sides of the chest and also appears to be wearing a headdress or cap. The “ears” either side of the head are over large but could equally be part of the headdress. It’s worth comparing the headdress to those on the Ampney St Peter and Bredwardine figures as they both have a similar close fitting headdress.

The carving is made of Clunch being a form of gritty grey chalk. According to local historian A.R. West the stone is not native to the area which would mean either the stone was imported or the carving has come from elsewhere. It’s curious that it should be named after the material it was made from rather than the subject matter. 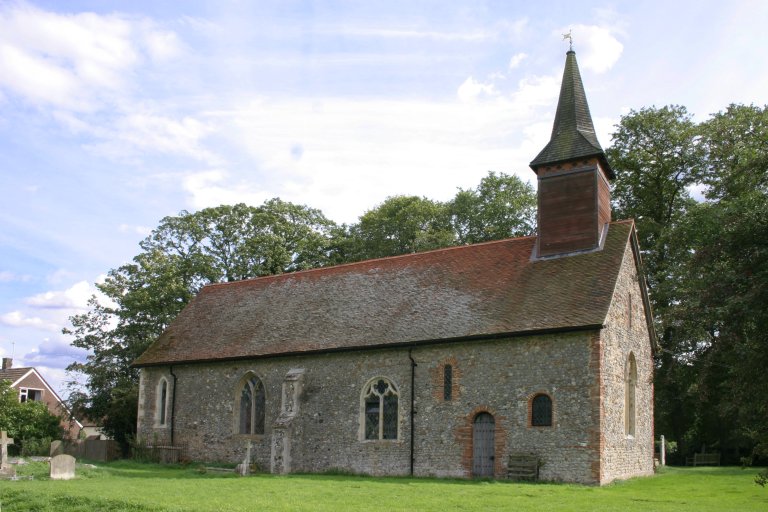 The thorpe in Easthorpe is thought to derive from the Saxon word Thorp meaning hamlet or farm. In the time of Edward the confessor it was held by one Eadric a freeman. The Domesday book records the village as Estorp being held by Hugh an under-tennant of Count Eustace of Boulogne. The successors of Hugh held the village until the late 12th century when it was granted to the Gernon family. The church originally had a semicircular apse which was demolished in the 13th century. Much of the remaining fabric of the church is Norman and a number of windows still exist from that period. It’s difficult to say whether or not the sheela figure is an original part of the church. The carving is fairly small and highly portable and the material from which it is made is not local to the area. Other figurative carving on the church is in a different style and appears to be of a much later date. There are however fragments of dressed and molded stone work embedded in the outside walls of the church. It’s hard to say whether these came from an earlier incarnation of the church or elsewhere but the re-used round window would seem to suggest that fragments from other buildings have been incorporated into the building.

Some musings on ELUI

Though much has been written on the word ELUI carved on the side of the figure, the meaning of the word remains elusive. Here is some further speculation.

Romans they go the house – Is it Bad Latin?

If we take into account the theory that sheelas represent the sin of lust then a figure representing lust inscribed with an inscription commanding “wash away!” seems to make sense. i.e. Wash away your lustful thoughts. The only problem with this is that the imperative of eluo is eluta not elui so it would not seem to be a command. Easthorpe church. The round-headed doors and silm window on the right hand side of the picture are Norman and are made from re-used Roman bricks.

The Lewis & Short Latin Dictionary has the following entry for elui

This definition would seem to support the meaning of to dispose of/wash away/cleanse the sin of lust represented by this figure. Whether or not this 100% good Latin may well be beside the point (an example of an incorrect Latin inscription can be seen on the Iohannes Moridic stone at Llanhamlach) medieval latin scholarship was very variable. The person who requested the inscription may well have been educated enough to understand that the word means to wash away yet not use the correct form of the verb. It is also worth noting that the quote from Cicero above is used in the sense of “washing away sins” as well.

I am not a Latin scholar and I am not sure that the word “elui” would have been in use in the middle ages as it seems only to have been used in a classical context. The word however does appear in the works of Erasmus of Rotterdam 1466-1536 but he was noted for using a pure Latin style.

Carved plaster covered brick in the wall of the church
This avenue of inquiry seems to have some merit and I am surprised it has not been suggested before. If any Latin scholar would like to confirm this theory or indeed completely blow it out of the water I would be happy to hear from them.

Moulded plaster covered brick embedded in the wall of the church. The molding is still quite sharp which would seem to indicate it has not been exposed for that long. The church was renovated in 1910 so was this part of the renovation
Other meanings for Elui are:

The name Elui is also the Hebrew name given to the month of September. A medieval Romanized Hebrew inscription seems unlikely though.

Elui also forms the middle of Alleluia however the elui on our sheela seems to be complete with space enough left on the carving to represent the whole word. 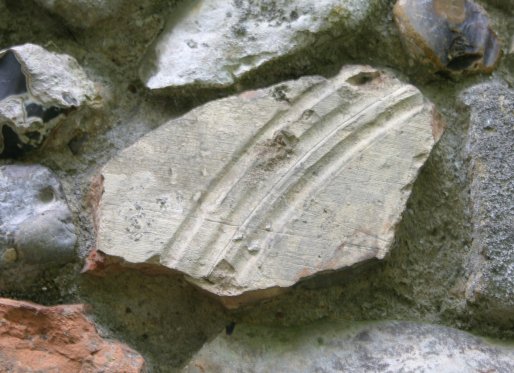 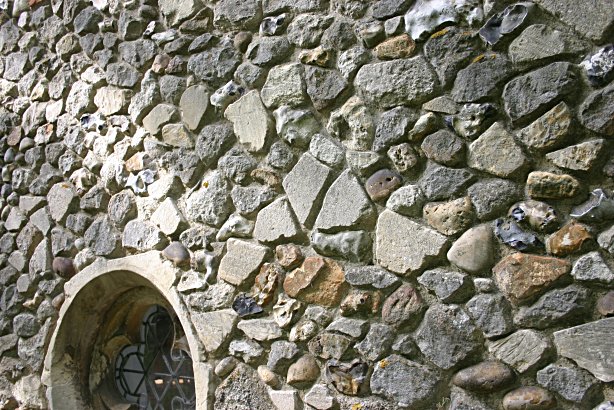 Fragments of finely dressed stone work embedded in the church wall along with a re-used round window.