The Cynghordy figures are mentioned in the book The Visual Culture of Wales : Medieval Vision. They are currently housed in Camarthenshire County Museum but were originally from an mansion house in Cynghordy. The figures were donated to the Camarthenshire Antiquarian Society and Field Club by a Captain Walter P. Jefferys but the date of the donation is not known. The figures were found embedded in the porch of the house when extensive alterations were made to it in 1886. The house was also said to contain a “disturbing phantom” in one of the rooms. The figures were originally painted and were cleaned by the society 1. It’s not stated whether the painting was whitewash or something more along artistic lines.

The Figures
The figures appear to be part of two pillars possibly from a doorway as there is carving on three sides of each figure (see below). Each of the front facing figures (left) gesture towards the pubic area. One figure holds something between its hands (an erect penis?) the other gestures towards the groin where a small rounded oblong lies, possibly a pudenda. Confusingly the “male” figure also has something between its legs which does not appear to be testicles and the female “pudenda” does not have a slit or opening which would definitely make it a representation of female genitalia. Both figures have vestigal nipples. On the right hand side of the “female” figure an animal with a long tail clings to her back. This has been interpreted as a monkey in The Visual Culture of Wales. One of the monkey’s lower legs could be interpreted as erect penis however this open to debate. On the left hand side of the “female” there is a figure with raised arms which appears to be standing on something. The groin is represented by a small incised triangle which may indicate the figures is meant to be female. On the right hand side of the “male” figure there is what appears to be another male figure with a large nose who appears to be holding a now broken erect penis. On the left hand side there are two figures and animal of some type which has been interpreted as Adam and Eve in The Visual Culture of Wales.  The “male” figure is also standing on a tube like structure which wraps round to both sides of the figure. This could be interpreted as a serpent with the head of the animal being the head of the serpent. However the carving is not clear and again this is open to interpretation. The “serpent” could equally simply be a piece of decoration for the male figure to stand on.

All in all these figures are puzzling, while the sexual organs have definitely been carved they have been done in an ambiguous way which leaves the sex of the figures open to question. The “male” figure has a lozenge between it’s legs which could indicate it is meant to be female yet it also holds a stubby “penis” in it’s hands. The “female” figure’s “pudenda” lacks a defining opening and could equally be interpreted as a flacid penis. The single side figures are a little more definite but even they are open to interpretation. Interestingly another set of Welsh figures in Llanhamlach are also ambiguous, along with the questionable “vulvar phallus” in Raglan.

Thanks go to Gavin Evans of Camarthenshire County Museum for giving us a private viewing of the figures while the museum was closed and allowing us to take pictures of these remarkable figures. Copyright of the pictures remains with the museum and any enquiries for use should be addressed to them.

1. The Eleventh Year’s Transactions of the Camarthenshire Antiquarian Society and Field Club 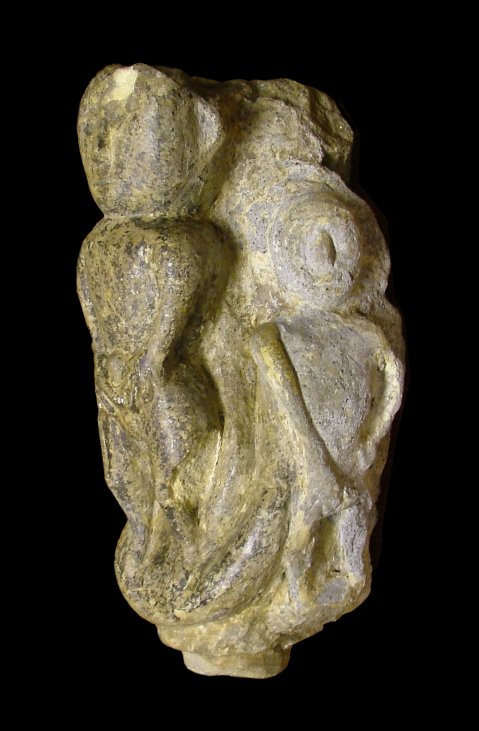 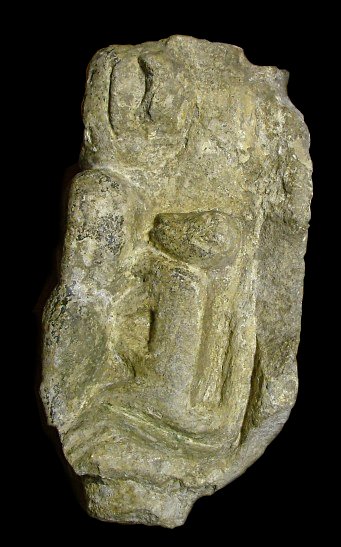 “Monkey” on female figure’s back. 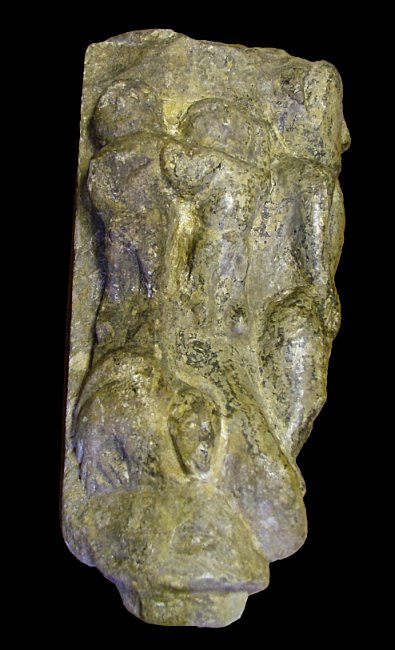