There are large images on this page please wait for them to load
The church of St John the Baptist Burford contains a small slab set into an internal turret on which are carved three figures which are thought to have come from an earlier building. This is supported by the fact that the stonework of the turret contains stonework from an earlier Saxon building. The figures comprise of three crude figures two of which appear to be displaying sexual organs. The figure on the left appears to have a slit indicating a vagina. While the middle figure has small “penis” peeping from beneath it’s skirt like garment. The middle figure is also gesturing towards the vaginal slit of the left figure. On the right we have a figure which at first appears to be a centaur but on closer inspection is a badly carved representation of a figure riding a horse.

Experts disagree on exact date for the carving some placing it in the 12th century interpreting it as the Holy Family on the flight into Egypt. It seems strange and even shocking to our modern view that differentiating Mary and Joseph would be represented by showing sexual organs. But it’s worth remembering we are looking at the carving with modern eyes and not those of the original sculptor

Other experts date it from the time of the Roman occupation which would make it a Romano-Celtic figure. While this is definitely not a sheela carving it’s also definitely an exhibitionist one but not one which fits easily into the rest of the catalogue of exhibitionist figures.

Romanesque arch on the west door of the church complete with Beakhead and Monster figures. The arch is circa 1175. The door and hinges are thought to be original 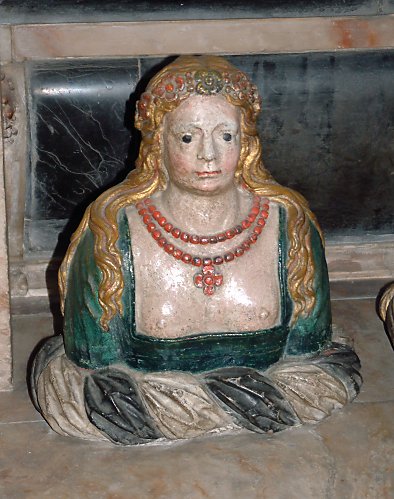 17th Century figure from the tomb of Sir Lawrence and Lady Tanfield. It’s interesting to note that this figure dates from the time of the puritans. A period in which we would expect a severe degree of sexual repression yet here we have a bare breasted young woman appearing on a tomb. It may be that our prejudices of the past being more sexually repressive have more to do with a comparatively recent Victorian influence than any basis in reality.