The Destruction of the Figure

This figure was destroyed in November 2004

The figure as it is now

Sometime between the 10th and 11th of November 2004 this figure was destroyed by a vandal. It’s been in the church probably since the early 1100s only to be destroyed by some idiot with a chisel.
It’s interesting that one of the parishioners was not too unhappy to see it go, mainly because it was “pagan”. The pagan survival theory for sheelas is probably the one with least evidence to support it, most of the evidence points to a medieval Christian origin for them. There has been some speculation that the damage may have been done due to it’s supposedly “pagan” nature. If this is the case then the person who did the damage may like to know they have destroyed part of their medieval Christian heritage rather than the desecration of a pagan idol. Whatever motivation was behind the damage there is no denying it was a mindless act. The destruction was widely reported including a short mention in the Telegraph.

Emeritus Professor of the University of Sussex, Robin Milner-Gulland wrote an article in the December 2014 edition of Sussex Past and Present the Sussex Archaeological Society Newsletter. The following quote is from the end of the article

The carving, including the roundels, was destroyed by chisel (left-handedly) on the 10th or 11th November 2004; the fragments were left on the floor and put in the care of one of the churchwardens.
They were inspected by a representative of English Heritage, who reported that the stone was friable, the fragments small, so ‘reconstructive surgery’ would be needed if they were to be restored – but it was not impossible. A strange ‘ghost’ of the carving can be detected on the impost. The vandalism was reported in the press, the police made investigations, but since that time everything seems to have stalled and the fragments to have been lost. The police have a suspect, but in the absence of hard evidence are not in a position to make an arrest. It wasn’t, apparently, a random act by a passing stranger, but seems to have been somehow connected with parochial dissension between different groups in the congregation: the supposedly ‘unChristian’ carving was perceived as malign. When I suggested to a churchwarden that a photograph of it could be displayed, I was told ‘it wouldn’t last a week’. So after ten years we still live with the consequences of an act of deliberate vandalism in one of the most precious of Sussex
churches: a mystery story that lacks its final chapter. 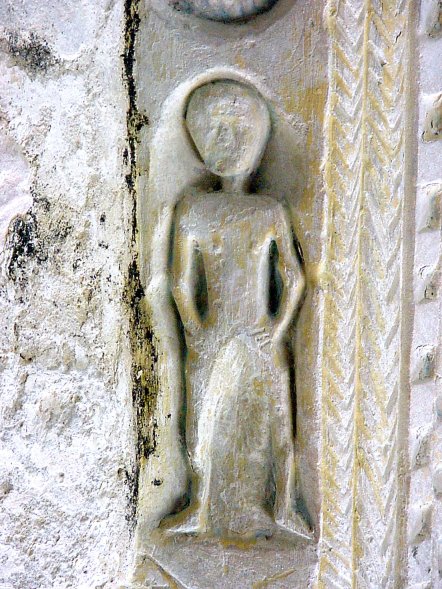 This Sheela can be found in All Saints Chapel near the tiny village of Wiston in Sussex. The church is situated well off the road behind trees and is very easy to miss. I drove past it a few times while looking for it. There is a red sign on the road indicating the presence of the church which belongs to the parish of Wiston with Buncton. If you have read Images of Lust this sheela only gets a passing mention and is reported as being in the village Buncton. This is not entirely accurate as it is situated a little way outside the village of Wiston, in fact Buncton seems to consist of two or three houses and is not clearly signposted.

The figure itself is situated on the left side of the chancel arch. It is quite high up and unusually it lies on it’s side. (see below). A note in the church describes the carving as being that of the mason and makes no reference to it being a sheela or even female. There may be some doubt as to whether this carving is a sheela or not. There are no obvious genitals on display but there does seem to be some indication of toolwork where the genitals should be. If there were genitals at so me time then the carving would be similar to the one at Oaksey in Wiltshire. This similarity is further borne out by the fact that stances of the figures in both carvings are very similar and it appears to be pointing to the vagina in the same way as the Oaksey sheela. The carving also has two very small breasts or nipples which are not obvious in the photograph. The short comment in Images of Lust quotes Professor G.Zarnecki who describes the carving as being”much rubbed”, I find this hard to believe for a number of reasons.

1. The carving is far too high for anyone to casually rub it. You would need a ladder or be standing on a chair to reach it.

2. The carving appears to be in situ i.e. It does not seem to have been moved from some more accessible place where rubbing could have taken place.

To my mind it makes more sense that if the carving is a sheela then it has been carefully defaced at some time, notice the scratches around the genital area in the photograph above. In addition to this there is a vulva shaped depression between legs which would seem to that perhaps at one time the figure was more exhibitionist than it is now and has been the victim of some puritanical “enhancement” rather than rubbing for good luck or fertility.

The church itself is very old dating back to between 1150 – 1180 although land had been granted to the church in this as far back as 791 AD. Its Romanesque elements lend some weight to image being a sheela as they are normally found on buildings of this era. Another feature on the carving may point to the image being a sheela. The left had rests on the hip of the figure while the right arm seems to straighter with the now missing right hand resting slightly lower down. It may be that the figure was pointing to the genital area in much the same way as the Oaksey and Lower Swell figures. Another aspect of the carving ties it in with the blind arcading found on the outside of the chapel. The round hatched circle above the head of the figure (right)Oaksey is duplicated on one of the arches in the arcading. (See Below)

The History of the Chapel

The chapel stand on the hill of Biohchandowne from which Buncton is thought to have taken its name. There is no record of a chapel in the Domesday book despite the fact that a royal charter granted the land to church in Saxon times. (For a detailed paper on this charter click here http://saxon.sussexchurches.co.uk/buncton_charter.htm)

The following is extracted from a visit made to Buncton in 1871 by Mr. MatthewOaksey Holbeeche Bloxam, his brother, the Rev. J .R. Bloxam, and the Rev C. W .A. Napier. Rector of Wiston. Originally published in Sussex Archaeological Society Notes And Queries in 1913.

“The Chapel visited by me in September 1871,is a small Norman edifice, consisting of a nave and chancel only, with a modern bell –cote over the west end of the nave, containing a single bell. The exterior of the nave is extremely plain, and the walls are unsupported by buttresses. The south door has been blocked up with masonry plain horizontal lintel, consisting of a single stone, forms the head of the doorway, above which is a plain semicircular arch.

The chancel arch is semicircular and Norman in style, the chancel does not appear of its original dimensions, but may have been shortened in the 14th century. It is now in the interior 13 feet 6 incOakseyhes wide by only 11 feet 6 inches in length. On the north side of the chancel arch there is some rude sculpture of a man. It is lighted by a small Norman or early English window of a single light, both on the north and south sides. In the east wall is a decorated window, either modern or restored. In the south wall of the chancel is an Ogee-headed Fenestella, trefoiled under the head and moulded. Within and beneath this is a projecting perforated basin or piscina; this is thought to be of the 14th century. In the north wall opposite the piscine is a somewhat large but plain pointed locker, divided by a stone shelf of the 14th century.

On the exterior or the chancel on the north side and on the south side there are three pointed arches, in either wall, of semi-Norman design, somewhat rudely ornamented with Norman mouldings. The Walls are constructed chiefly of flint and rubble masonry, intermingled with Roman tile. The east wall of the chancel is of Ashlar masonry, and appears to have been constructed in the 14th century, when the chancel was shortened. Projecting from this east wall inside are two small moulded brackets of the 15th century. There are no details or indications of masonry of greater antiquity than the middle of the 12th century, circa A.D.1150; the chapel was, in my opinion, constructed.”

Buncton Chapel on other sites

There are some better pictures of the figure at
http://saxon.sussexchurches.co.uk/images/buncton/buncton2/index.htm

And a better picture of the above figure here. You can see the tool marks between the legs quite clearly.
http://saxon.sussexchurches.co.uk/images/buncton/buncton2/pages/DSC05448.htm

There is a detailed description of the chapel here along with a early photograph of the figure.
http://saxon.sussexchurches.co.uk/buncton.htm