Text and photographs by Keith Jones

This Sheela was located in the 12th century cloister of priory church of St Mary’s, Bridlington. Little now remains of the cloisters except for their foundations on the south side of the church. When the Sheela was found in the church yard, a portion of the arcading which contained the figure was reconstructed, and placed on display in the north aisle of the church.
The Sheela straddles two modern colonnettes.. It stands 1.65 metres from the ground, and measures 12cm long, and 9cm wide. Although somewhat weathered the mouth, broad nose, and eyes are just evident. The figure has a broad well marked forehead, and this combined with possible small ears, gives the appearance of some head gear. Her two spindly arms are held down the side of her trunk, and it appears as if the left arm passes beneath the left knee. Below the trunk her faded two hands come to rest on a small distinct clefts which suggests the genitals, and some fingers can just be made out. A very thin rather spindly left leg is held away from her body, but her right leg has weathered away. Her shoulders appear humped, while her right shoulder is much thicker then her left, and seems to be pushed forward, perhaps deliberate to give the appearance of a hump-back.

Horse-shoe like structures also decorate the Sheela, and according to Walker (1996):

‘Hindus, Arabs, and Celts regarded the yonic shape of the horseshoe as a symbol of the Goddesses ‘Great Gate’, thus it was always esteemed as a prophylactic door charm’.

Although this figure is weathered it would seem from the remaining visible carving that it may a have been exhibitionist. It’s interesting to compare this figure with the one at Haverfordwest which is similarly on a cloister capital. Since the cloisters were meant primarily for use by the clergy it would seem to suggest that these two figures served as warning against lust rather than serving an apotropaic function.

Hard to Photograph
This figure like the one at Croft on Tees has the reputation that it is difficult to photograph. David Clarke and Andy Roberts in their book Twighlight of the Celtic Gods tell of Jean O’Melia a colleague of Sidney Jackson who had difficulty photographing the Croft on Tees Sheela. She failed to get pictures of the Bridlington figure and of another unnamed sheela na gig in Ireland. 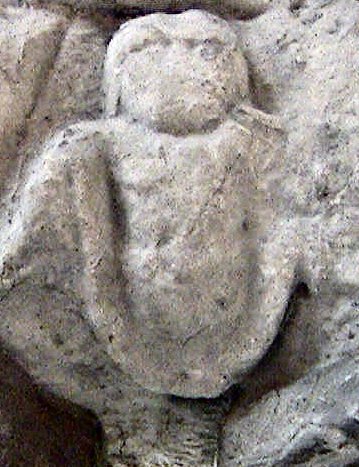 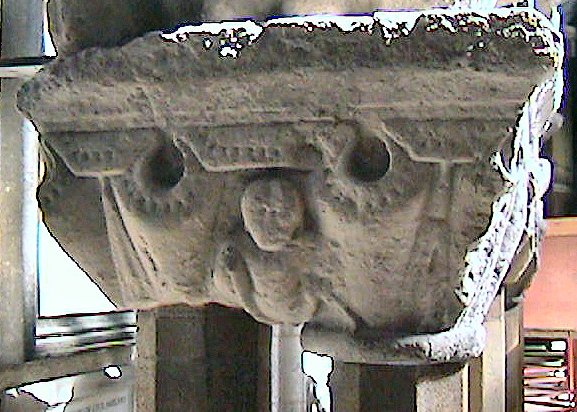