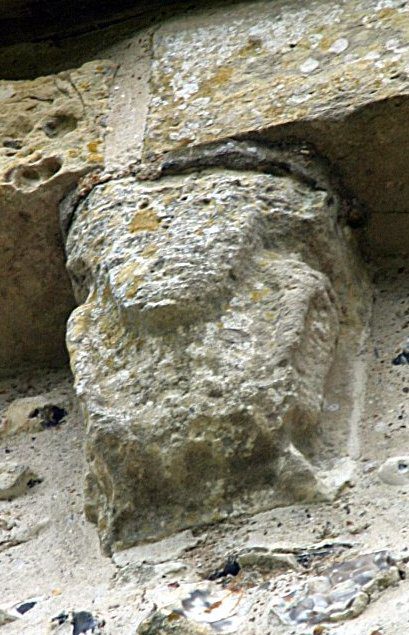 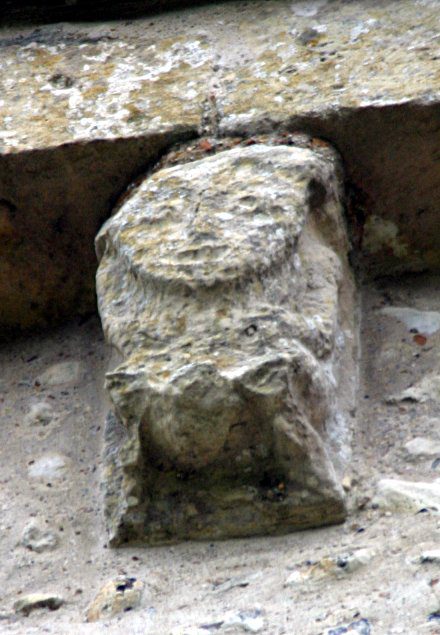 The church of St Andrews at Bishopstone Sussex has Anglo Saxon origins as can be seen in the sundial above the main door of the church which bears the name Eadric.The church houses a number of Norman and pre Norman features and is thought to date from the 8th century. The church also bears on the corbel table of the tower two very worn figures which may be male and female exhibitionists. The female is the more convincing of the two with the remains of a shallow oval on the underside. The legs are practically worn away but it was likely that they were bent and  the feet faced towards the wall. You can also still faintly make out the arms gesturing the groin possibly in a “hands in lap” pose. The face is faint but can still be made out in the picture above. The jaw is fairly square unlike its companion two corbels to the right who’s head is much rounder in comparison. The “male” figure, if male it be, is somewhat less convincing than its female companion. It has a similar pose with the legs arranged in the same way and what appears to be the remains of a scrotal sack. This is however open to interpretation. There does appears to be a large bulge between the legs and small worn protruberance emantes from this bulge The arms of the figure seem to be laid across the chest rather than pointing to the groin.
It’s hard to tell if both these figures were once exhibitionist due to weathering, which has probably been accelerated by the coastal location of the church. The CRSBI site mentions both figures as a “sheilanagig” sic  but puts a question mark against both.
The context of these corbels i.e. on a Romanesque corbel table counts in favour of these orginally being exhibitionist but while likely it’s impossible to be sure due to the weathering. (For an example of a worn figure which has all the attributes, but is unlikely to be exhibitionist, see the Gloucester Annus Figure) 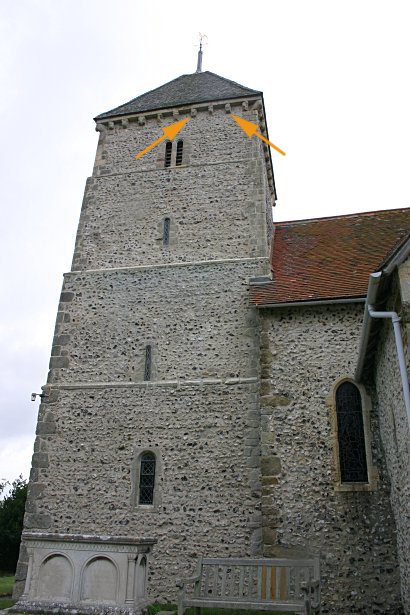 The church tower. The arrows indicate the two possible exhibitionist figures. The rest of the corbels include many common Romanesque motifs such as double heads and beasts. The main porch lies to the right of the picture. 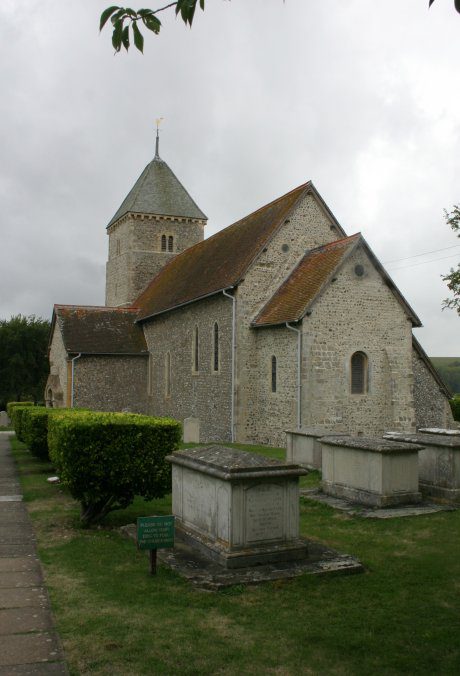 End view of the church. Notice that the decorated tower corbels go right round the tower.

The main door of the church bears a Romanesque archway. The sundial above the door is thought be Saxon and bears the inscription ‘Eadric’ preceded by an equal armed cross.