I finally managed to visit Binstead with my wife in June 2008.

The visit was very informative as we photographed other pieces of sculpture in the church which firmly put the sheela and animal head figure in a Romanesque context.

The church was thought to have served the workmen in the nearby quarry and from Herringbone work in the walls is thought to date from the mid 12th century around 1150.
Nearby lies Quarr Abbey, a Cistercian house dedicated to the Virgin Mary which was founded in 1131, by Baldwin de Redvers, finally being consecrated 1 June 1150.”

Due to the low status of the church and the nearness of the higher status building it would seem likely that sculpture was more likely to originally have been part of the fabric of the abbey. Only a few ruins remain of the original abbey which was dissolved in the 1500s. The present abbey building dates from 1908. As we have seen in other churches,sculpture is frequently re-used. It would seem likely that the the romanesque fragments were rescued from the abbey ruins and re-used at some point in Binstead church rather than being part of the original Romanesque incarnation.

The head on which the figure sits is definitely an animal head grasping its snout with its paws. This is a common romanesque motif and can be seen on many other churches (e.g. Penmon on Anglesey in Wales). This along with the other fragments in the church appear to be Romanesque in style. The sheela figure appears also appears to be Romanesque in style although it is very weathered. Unlike the animal headbelow it is not a corbel being carved in the round. (Compare to the Holdgate sheela na gig in Shropshire).

There are number of carved corbels inside the church along with a grotesque hunched figure on the end of the church abovethe romanesque fragments. These are thought to be Victorian although some of the interior corbels have been carved in a Romanesque style. Two of the interior corbels, which are crudely carved, appear to be pipe player which may also be an angel,  while the other appears to be drummer although both are hard to make out. 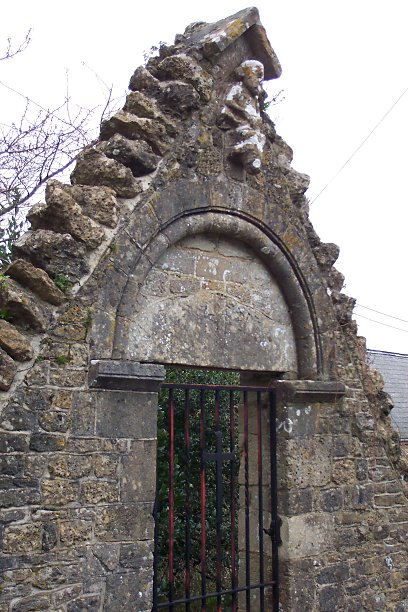 “The Idol” an older name

It’s worth noting that the name “The Idol” is the oldest recorded name for a sheela predating John O’Donovan’s “sheela ny gigg” by 59 years. It is mentioned in 1781 in “The History of the Isle of Wight” by R. Worsley and mentioned again in 1795 by J.Albin in “A New, Correct and Much-improved History of the Isle of Wight” (Andersen). “The Idol” name was also applied to the sheela in Lusk, County Dublin in Ireland.

The following information is from visits made by Keith Jones and Paul Sivell a local resident.

A rather badly weathered sheela which is situated at the apex of an arch gate which leads into the grounds of the church. The figure appears to be seated, with her arms resting above her genitals, with a circle vaginal cavity below. She appears to be sitting on some structure with her legs bent at the knees, and widely splayed. Her face is now very badly worn, but is bald, and her large ears are still to seen. Formerly it is though that it had been placed on the church.

The figure was first mentioned in “The History of the Isle of Wight” by R. Worsley published in 1781;

‘The church is a small plain building having nothing remarkable about it, but a rude and very ancient piece of sculpture over the key-stone of the north door, representing a human figure, sitting with the feet on a kind of pedestal, resembling a man’s head; the whole is about two feet and a half high; it is vulgarly called the Idol,’ (N.B. Local tradition refers to the figure as the ‘Saxon Idol’ 1)

‘The squatting figure is seated on, and supported by an animal head, the mouth of which can be seen from below, and with paw like projections on either side of the head.’

In light of the negative attitudes towards Sheelas, it is refreshing to consider John Albin’s note in his History of the Isle of Wight published in 1795:
‘A report is related, that this figure was removed some years ago, when the church was undergoing some repairs, but that it was restored to its ancient situation on its being productive of displeasure to the inhabitants.’
Of the old church, only the chancel now remains, and the traces of herringbone stone work, suggests an early Norman, or Romanesque date. In 1844 the old nave and associated structured which were contemporary with the chancel were rebuilt. The church notes state the Sheela was originally located above the north door of the nave. The church notes claim:

‘Studies by G. E. and A. L. Hutchinson of the Isle or Wight Natural and Archaeological Society confirmed the figure as a Sheela na gig associated with pagan properties of protection, and possibly fertility’.

During my visit, I found the figure on an ornamental gate a little south east of the church. The figure which measures 36cm high, 33cm wide, sits on an animal’s head which is 31cm. High, and is 3.4m off the floor.

Although the Sheela is weathered, and covered in part by white lichen, it is still possible to make out quite a lot of detail. Her head is bald, and seems proportionally larger then her body. She has very large ears, much like the Scregg Castle Sile. Both arms come to rest in rather flat hands each side of a clear vaginal cavity. The figure has very broad hips, which contrast with rather spindly legs which suggests this is a seated figure. I would agree with the suggestion that she sits on an animals head. The animal seems to wear a muzzle, and appears to be a bear.

‘You will see that there has been some modern re-pointing and there dollops of cement mortar under each of the sheela’s feet. I don’t know if you agree but the feet appear to to curve in and it looks as though both hands & feet are being used to to pull open the vulva. I am undecided about the stone beneath. The sheela is sited above the archway to the east of the main entrance to the church. It is about 4 m up and approx 0.5m in height (excluding the base stone). It is made from Binstead/Quarr limestone. This was quarried extensively in the immediate vicinity of the site, quarrying apparently began around 300 A.D. although it was most famed during the medieval period. Winchester Cathedral, Romsey Abbey & the upper portion of the tower of London were all made from

Binstead Limestone. The sheela has always been known locally as the “Saxon Idol”. I was first shown it and told this as a child by my father in the mid 1950’s.