The figure appears to be a corbel (see below) and the local town guide states that the figure originates from Glastonbury abbey. From the style of the figure it would appear to be from the 15th century and it similar to other carvings at nearby Castle Cary Church (see below)

“This carving was installed in its present position at his home by my grandfather, Wosson John Barrett, assisted by local builder G. Stockley, in the late 1930s or 1940s – I have several photos of this being done. The Barrett family had a number of grocery and confectionery shops in both Castle Cary and Glastonbury – it is believed this carving came from the garden of one of the Glastonbury shops, no. 10 High Street – the garden was a plot detached from the actual building plot, to the south and a little to the east, bordering the north side of the abbey site. These plots were full of rubble and material from the ruins. The grotesque as now sited is combined with the top part taken from a staddle stone, and the weather vane came from the remains of a nearby demolished house, the ‘Lower House’ at Ansford mentioned in the Woodforde diaries. All three items were installed here at the same time. We have recently been informed that the symbolism of the grotesque comes from Revelation chapter 12, and that there are other Somerset examples also associated with Glastonbury Abbey.”

Glastonbury Carvings
There are at least two carvings mounted above some of the shops in the main street in Glastonbury. These appear to be made from the same material and are similar in style 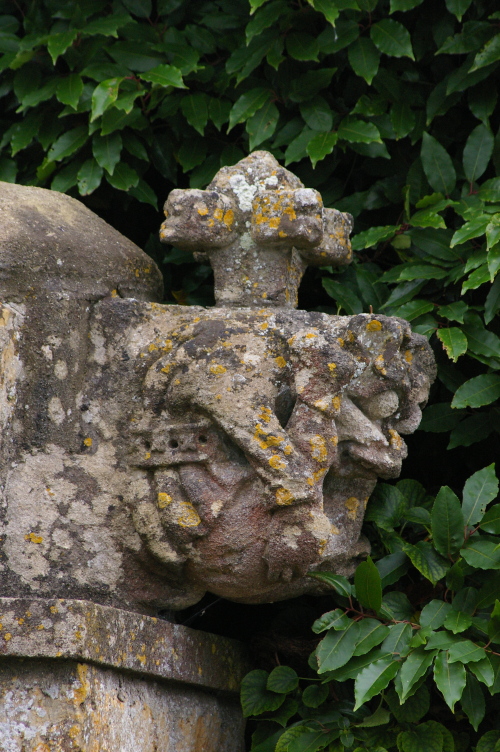 Side view of the figure. The flat top may indicate that it is a re-used corbel with separate finial cemented on top. Conversely the figure may just be a decorative feature. Examples of this can be seen on the church at Castle Cary which only have a decorative function. There appear to be worn animal heads on each side of the finial

Figure at nearby Castle Cary church dating from the 15th century. The eyes are treated in a similar way to the anus shower though other figures eyes have drilled pupils. This figure is purely decorative.

Male and Female monsters at Castle Cary church circa 15th century (notice the breasts on the left hand figure). Compare these to the monstrous anus shower at Mere.