In her book ‘Explore Green Men’, published in 2003, Mercia MacDermot reported the presence of a ‘Sheela’ and a phallic male on the gatehouse of Tickhill Castle, just a few kilometers west of Austerfield. The castle located 9km south of Doncaster, is on private land which is owned by the Duchy of Lancaster who have refused access to the public for a number of years. Although blocked by a large wooden gate the medieval gatehouse and its carvings can be clearly seen from Castlegate Road. Viewing is difficult during the summer months due to dense tree foliage.

The castle at Tickhill was built by Roger de Busli (alternate spellings abound and include Busili, Buslim,Buslin, Buesli and more commonly Bully) from the land given to him by William I for his assistance in the invasion of 1066. Roger de Busli was a major landholder in the Domesday book holding 174 estates in Nottinghamshire. His seat of power was at Blythe but Tickhill was his main castle. Originally, a Motte and Bailey the castle was added to throughout the years, culminating in the 17th century Manor House. The curtain wall, and gatehouse was constructed during early 12th century (1129-30?), and the barbican added in the 13th century.

The gatehouse is decorated with four pediments inlaid with small crude statuettes and slabs. The carvings are considered of late 11th or early 12th century ornamentation. There are five human figures amongst the decorations but of the two are of particular interest.

To the right is a rather squat figure which could be MacDermot’s suggested Sheela, where both arms held down the trunk, come to rest at the lower abdominal area. Two short legs are held straight, and at an angle of the body. Although an outline of a head is just evident, no features can be seen.

The figure to the left is more complex, and could be male or female. It has a long slender body, its large head contains a broad nose, and the position of the two nares is evident, as are two small eyes. Two arms are held close two the body and come to rest, cupping the genital area, where fingers are clearly discernible. If a female, the pudenda consists of a circular hole, and like the Church Stretton figure seems to contain a stone. The rather large pelvic area, which may suggest the figure is female, is supported by two short legs. If the figure is male, the large pelvic area becomes the figure’s hands (a little too large when compared to the size of the figures arms however). In effect the large hands are holding the base of the penis. The hole may be a socket where a penis was inserted. Both figures are rather worn, and it is difficult to be certain.

Although fairly common in Ireland, secular/castle Sheelas are very scarce on the British mainland. The only known other known example can be found in Haddon Hall. However while sheelas on castles may be rare in Britain sheelas associated with castles are more common. Kilpeck, Devizes, Holdgate and the possible sheela figure at Bredwardine are all castle churches and are intimately connected with their accompanying castles often forming part of the castle complex.

Interestingly a definite sheela na gig lies around 5 miles to west in the village of Austerfield in church built by another member of the Bully family, John de Bully. This figure, dating from around the same period as the gatehouse, adds weight to the likelyhood of these worn figures being exhibitionist with local sculptors being familiar with the exhibitionist motif. Like Kilpeck and Holdgate these castles were the main castles for their lords and all are connected with sheela na gig carvings. Tickhill is another example where we have (possible) exhibitionist figures associated with the main castle of a powerful local Norman lord. It seems that sheelas and status are connected in some way (this idea is currently being explored by Dr Theresa Oakley). 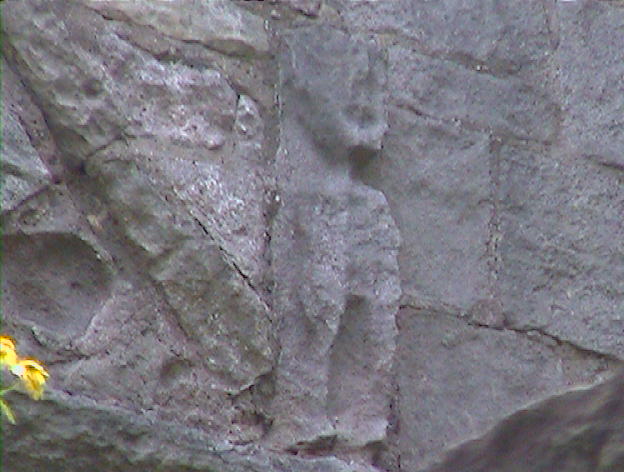